Relais St-Denis has its origins in a very particular story which would be worthy of great novels. At the beginning of the Second World War, on July 24th, 1940, English noble families who were anxious to ensure the safety of their children decided to send them and their governesses to take refuge in our area.

Fleeing the bombing by the Germans and Italians in their country, 80 girls and boys landed at the Old Colony Inn, (today known as Relais St-Denis), which served as a shelter and school (the Rydal School) throughout the war. During the four years their stay lasted, the children were able to enjoy Saint-Sauveur’s fresh air and country living.

When the war ended, more than half of these children returned to England via Lisbon and were given safe conduct home. The others chose instead to move to Montreal and settle there.

Major renovation work and enlargements in the 1970s helped refresh the hotel without disturbing its important past. That’s why we have preserved its “U” shape. The old section has two dining rooms, a bar-lounge and conference rooms, while the rooms and suites are located in the new section.

Make a loved one happy! For one of our numerous packages or to simply add an amount towards the purchase of a stay with us, gift certificates are a great way to treat someone to something special. 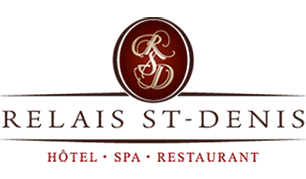